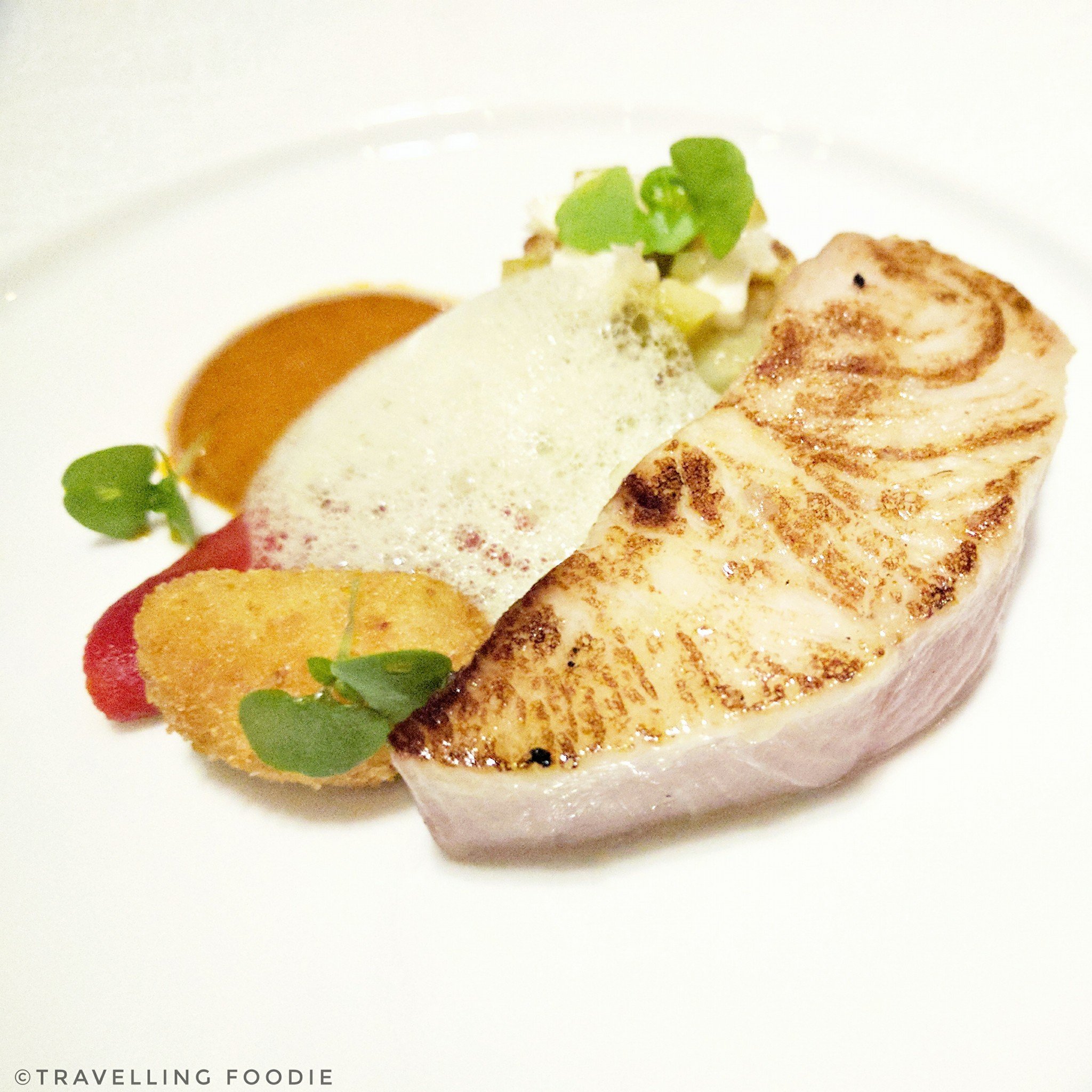 Alo Restaurant is a French restaurant in Toronto known for its tasting menu served in stylish, serene surrounds atop a Victorian building.

It’s very hard to spot Alo Restaurant as it is sort of tucked away among the other establishments with bright lights and big signs. The Alo sign is very small and is quite easy to miss, which we did actually.

When we entered the building, there’s a host beside the elevator door who checked our reservations. Once confirmed, she called the upstairs to tell them we’re heading up and then led us to the elevators.

There are two parts to the restaurant: The Bar at Alo and the main dining room.

The Bar at Alo is a 20-seater area when you exit the 3rd floor elevator and has its own menu mostly in the $15-20 shareable plates.

Once we reached 3rd floor and exited the elevators, the General Manager Amanda Bradley and Executive Chef Patrick Kriss were already waiting to greet us.

Another person was there to take out coats as well. We were then led to our table at the furthest end of the floor by the windows. Lighting is very dim here so sorry about the photos.

Travelling Foodie Tip: If you want to see the kitchen action or have good lighting for photography, be sure to request to be seated at Chef’s Table, a bar counter with six seats looking into the open kitchen. It has 16 courses for $130 (Note: It is $165 as of 2019).

I came here with my sister on December 2016 for a (second) celebratory dinner on her new job in Seattle, which was a good excuse for us to check this place out as it’s been in our list for a long time.

In case you’re wondering, for the first celebratory dinner, we went to Kaiseki Yu-zen Hashimoto.

We’re obviously doing the tasting menu at Toronto’s Alo, and we also did a half-wine pairing. They don’t really allow splitting a wine pairing into two glasses unlike other places I’ve been to.

They said we can just share the same glass from one wine pairing. This ended up to be better actually since they do give generous pours. I suggest doing this at Alo.

French gougères with caramelized onions, fermented jalapeño and fontina cheese baked inside of it.

It looked like a simple bread ball from the outside, but, when you pop one in your mouth, you are greeted with a mix of flavours that combined to one mindblowing delicious treat.

The dough had a crunchy shell but warm and moist dough inside, but then inside is mostly hallow with the tasty baked cheese inside.

The fermented jalapeno added a bit of kick and was good in cutting the saltiness of the cheese, and the caramelized onion added a bit of sweetness. Just perfect!

The second canapé just under the gougeres is Foie Gras with hearts of palm, passion fruit meringue and coconut. I’m a big sucker for foie gras, so this was definitely a treat.

Though it was just plain foie gras, the addition of passion fruit meringue and coconut added a nice touch and actually changed the overall taste of the foie!

I thought to myself, if the canapés were this good already, you know you’re in for a treat the rest of the night at Alo Restaurant.

I was so happy to see Foie Gras again! And this course reminds me of Molecular Gastronomy with its pureed foie gras, pureed celery and foie gras foam.

The celery helped balance the creaminess of the foie gras.

This course was a really good palate cleanser as foie gras items and gougères can actually linger in your taste buds.

We both got the Sea Scallops and Sea Urchin course because we’re both big fans of them. It was paired with Anselmo Mendes ‘Muris Antigos’ Alvarinho 2015 (Portugal).

It was amazing and one of my favourite dishes that night at Alo Toronto! The creamy umami taste of the uni went well with the scallop as it gave the dish a bite.

The Meyer lemon adds a nice citrusy touch and balances the creaminess of the uni.

Pain au Lait (Milk Bread) – The bread was so fresh and warm, topped with sea salt, and you can see the intricacies clearly seen from the layers in the bread.

It was already good in its own, but also great with the house churned butter.

This is pretty much the soup course: cream of potato with black truffle puree topped with Vacherin Mont D’Or cheese.

Burgundy black truffle only appears in fall. And, Vacherin Mont D’Or is a seasonal cheese which is available from October through until April.

The potato balances the saltiness of the cheese and the earthy taste of the truffle, the mix of which gives a whole new flavour profile that one may only get during fall.

For the sixth course, we get to choose again. However, we both decided to do one each so we can try both since they were both interesting.

Muscovy Duck, Cara Cara Orange, Coco Nib, Chestnuts – This was my course and, since we were only doing one wine pairing, the wine was paired with my sister’s course.

This was actually the course I was most disappointed in. Though the doneness was done perfectly, the duck itself was tough and hard to chew because there was quite a bit of sinew.

I preferred this over the duck. The hamachi was very fresh and love that it was grilled with some charring on the sides but was still raw on the inside.

The charring heightened the taste of the hamachi and added a crunch to the light and fatty inside.

For the main course at Alo Restaurant, we got the choice of St. Canut Rack of Pork, Walnuts, Cranberry, Five Spice, OR Beef Ribeye, Cipollini Onion, Spinach, Bearnaise.

There was no debate on this one that we’d both be getting the Beef Ribeye, which was paired with Brusset ‘Le Grand Montmirail’ Gigondas 2014 (Italy).

I loved the ribeye. It was very tender, marbled and melt-in-your-mouth!

The touch of bearnaise sauce added a richness to the steak and a hint of acidity that cuts thru the ribeye fat.

For the main dessert course at Alo Toronto, we were given choices again, but we ended up doing one of each.

Honey Crisp Apple, Puff Pastry, Calvados – This was my order so it didn’t come with the wine. It sort of reminded me of a deconstructed apple pie.

I actually ended up liking this more as well because there were more things in this dessert and I love the meringue that came with it.

The last course for the night at Alo Restaurant was Dark Chocolate, Coffee paired with Dona Matilde Colheita Port 2008 (Portugal).

This was my favourite dessert of the night! Not too sweet because it’s dark chocolate and coffee, but not too bitter as well.

I always tell people that Alo Restaurant deserves a Michelin Star the most out of all Toronto restaurants. Service here is like dining at a 3-Michelin Star restaurant.

The servers explain each dish properly. The sommelier explains the wine paired with the course: where it’s from, the character of the wine, and why it’s good with the course.

Crumbs were cleared after each course using a tool. Waters were refilled when the glass was half full.

When you leave your seat, staff along the path actually go to the side to make way for you.

When you come back, the staff would pull the chair for you. And you’ll find your napkins folded on the table and utensils properly stowed on the side.

When the bill comes, it comes in an envelope with a waxed seal of the Alo logo. This contains the menu of all the courses that night including the wine that was paired for each course.

After you’ve paid and are leaving for the elevators, you’ll find Chef Patrick Kriss and GM Amanda there to say goodbye and thanks, and also a staff already with your coat.

What an impressive service at Alo Restaurant! They actually exceeded my expectations in this aspect as it was better than some 3-Michelin restaurants I’ve been to.

Now you know why I was so shocked and disappointed by the service we got at, similarly ranked, Edulis in Toronto, which doesn’t even come close to this kind of service.

How To Make Reservations for Alo

If you want to dine at Alo, you most definitely need to make reservations because they are usually fully booked and have a long waiting list.

You can only make reservations via Tock. And from experience, you need to be available right at 10AM when the portal opens.

Obviously, I wanted to get a photo with Chef Patrick Kriss himself! I was sort of star-struck the times he greeted at the beginning and the end, that I didn’t ask for a photo at that time.

But I decided to ask when we already had our coats by the elevator, and they actually had to get him out of the kitchen.

One funny thing that GM Amanda told me was to tell him that I’ll only take a photo with him if he smiles because he rarely smiles in photos. So I actually did tell him that when he came out. And he… smiled a little. A WIN! 🙂

When he came back to Toronto, he worked for nearly two years at Splendido then went to Acadia restaurant before opening Alo Restaurant.

I say reasonable because 10 courses, plus 2 canapes, for $105 is quite good on a course/price basis.

The Tasting Menu at Alo changes regularly, at least once every month, so you will most likely never get the same menu, which makes it fun to repeat visits here and see the new offerings.

Considering how high-quality the ingredients were being used along with the creativity with the dishes (and I reiterate the amazing service), this is definitely a winner in my books!

Though it’s not a Michelin starred restaurant, Alo is one of the very few Toronto restaurants that deserve it because the experience is really on par with other Michelin restaurants I’ve tried, or even better! And it all starts with an unassuming ride in a basic elevator.

I definitely want to do the Chef’s Table next time!

Hope this restaurant review of Alo Toronto gives you an idea on what it’s like to dine here and do a tasting menu. If you do, be sure to make reservations!

5 thoughts on “Alo Restaurant, a Michelin Restaurant Experience in Toronto”