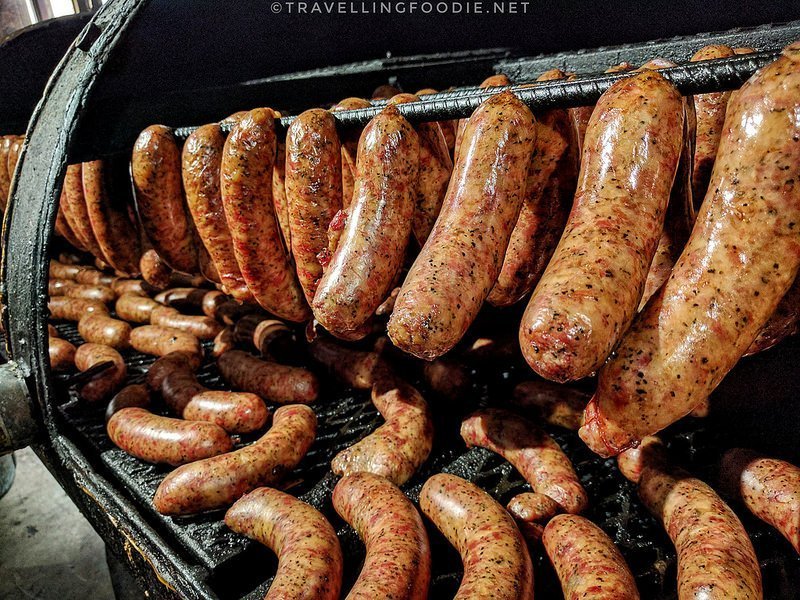 The first thing that everyone thinks of when coming to Texas is Barbecue, including my friends and family when they learned I was going on the Bold Food Tour. And, though we had a taste of barbecue from La Barbecue on Day 2, Austin Food Trip Day 3 was all about BBQ through an Austin Barbecue Tour!

The first agenda on our Austin Food Trip Day 3 of Bold Food Tour was to meet in the lobby at 8:45AM to go on a BBQ Tour with Access ATX, where we go around the Greater Austin Area for some of the best barbecue restaurants!

That’s right: Barbecue for Breakfast! Though Austin is quickly becoming the capital city of Texas BBQ, there are historic BBQ pits within an hour north and south of Austin located in Elgin and Taylor.

Did you know? There are three distinct things that characterize traditional Texas BBQ: Using post oak wood; Using a slow pit bbq; and serving the meat on a butcher paper.

Our first stop on the Austin Barbecue Tour was Southside Market & Barbeque, the oldest barbecue joint in Texas.

William J. Moon, a butcher from Germany, opened Southside Market in 1882 in Elgin, Texas to sell his extra meat before it spoiled. He would grind the beef trimmings as in German tradition, and the Original Elgin Sausage was born.

We were welcomed by April (Business Manager) and Charles (Restaurant Area Manager) to the restaurant. They gave a brief introduction and proceeded with the pit tour.

The flat pit smoked the lamb ribs, steak, jalapeno sausage and corn. The brisket and pork ribs are actually smoked in a rotating pit. We went outside to check out their mobile smoker, and back in to see more pits which smoke the famous Original Elgin Sausage.

The Homemade Original Elgin Hot Sausage is an all beef sausage with pork casing.

Did you know? Southside Market & Barbeque sells 3 million pounds of the Homemade Original Elgin Hot Sausages per year. On a Saturday alone, they sell 1,259 pounds.

We went inside to our table ready to feast. In our platter, we had Lamb Ribs, Sausage Slammers, Original Elgin Sausages, and Jalapeno Cheddar Sausages.

The Sausage Slammers are interesting. They are house-made pork sausage stuffed with a fresh Jalapeño half stuffed with real Cheddar Cheese, then tied in bacon and smoked low and slow over Texas post oak wood.

Next stop on the Austin Barbecue Tour was in Taylor, Texas. Louie Mueller opened Louie Mueller Barbecue in 1949, but relocated to its current location at 206 W. Second Street in 1959.

We got a pit tour here showcasing their briskets. They make 40 briskets a day, and their smoke process is different than other restaurants.

It’s a 2 day process where they heat up the brisket first, then cool it down, then heat it up again.

Perhaps the best question ever in any pit tour was asked by Bold Food Tourmate, Laura: Do you ever get attached to your brisket?

Our meal at Louie Mueller Barbecue consisted of their popular Beef Ribs, Original and Jalapeno Sausages. These came with samples of their original, jalapeno and mustard sauces for us to try.

Last stop in Austin Barbecue Tour is back in Austin for Terry Black’s Barbecue, which has been featured in Food Network, Travel Channel, and more.

We got a pit tour to see how they smoke their meats. There are two sheds where their pits are.

One is mostly for briskets, and the other for ribs and sausages. They smoke their brisket between 14-16 hours, and their sausages between 2.5-3 hours.

The platter at Terry Black’s Barbecue was great because we got a taste of everything: Pork Ribs, Beef Ribs, Brisket, Turkey, Original Sausages, and Jalapeno Sausages.

This was also the only one where we got to try sides and desserts: Mac & Cheese, Coleslaw, Baked Potato Salad, Beans, Banana Pudding and Peach Cobbler.

After all those meat, having a break from all that eating sounds good. One thing I haven’t had a chance to see much in my trip is nature, so I decided to walk from the hotel to the Congress Avenue Bridge to see the views of the Colorado River.

I also visited the Texas State Capitol, the oldest state office building in Texas, completed in 1888 in Downtown Austin.

It is a three-story castle-like structure which contains the offices and chambers of the Texas Legislature and the Office of the Governor.

Along the main walkway of the Texas Capitol grounds, you’ll see various monuments: Confederate Soldiers, Terry’s Texas Rangers, and more. I actually wanted to do the capitol tour but made a mistake with tour hours, and missed it completely!

One of the best festivals in Austin, the Moontower Comedy Festival takes place every year on the second last week in April at the Paramount Theatre and various bars and comedy clubs in Downtown Austin.

During our Bold Food Tour in Austin, the sixth annual Moontower Comedy Festival was taking place on the April 19-22, 2017 with over 100 comedians who came to Austin including Ali Wong, Patton Oswalt, Colin Quinn, Sal Vulcano and many more.

I watched Kill Tony by Tony Hinchcliffe at the Speakeasy because Sal Vulcano was there for this episode.

I’ve been such a big fan of Impractical Jokers that I wanted to make sure I see one of the shows Sal was in for the festival. I’ve never watched the podcast before, but ended up loving it!

The last dinner on our Bold Food Tour in Austin was at Barley Swine by Chef Bryce Gilmore, Food and Wine Best New Chef in 2013. Barley Swine is so highly rated that you’ll find it in almost every list of best restaurants in Austin.

This farm-to-table restaurant focuses on local products from within 50 miles of the restaurant. We had a multi-course tasting menu with wine pairing.

Did you know? Barley Swine uses Weige Knives for their steak knives!

Austin Food Trip Day 3 with Bold Food Tour showcased some of the barbecue and restaurants in Austin, Elgin and Taylor!

Huge thanks to Bold Food Co. for sponsoring this post! As always, all thoughts/opinions are 100% my own.