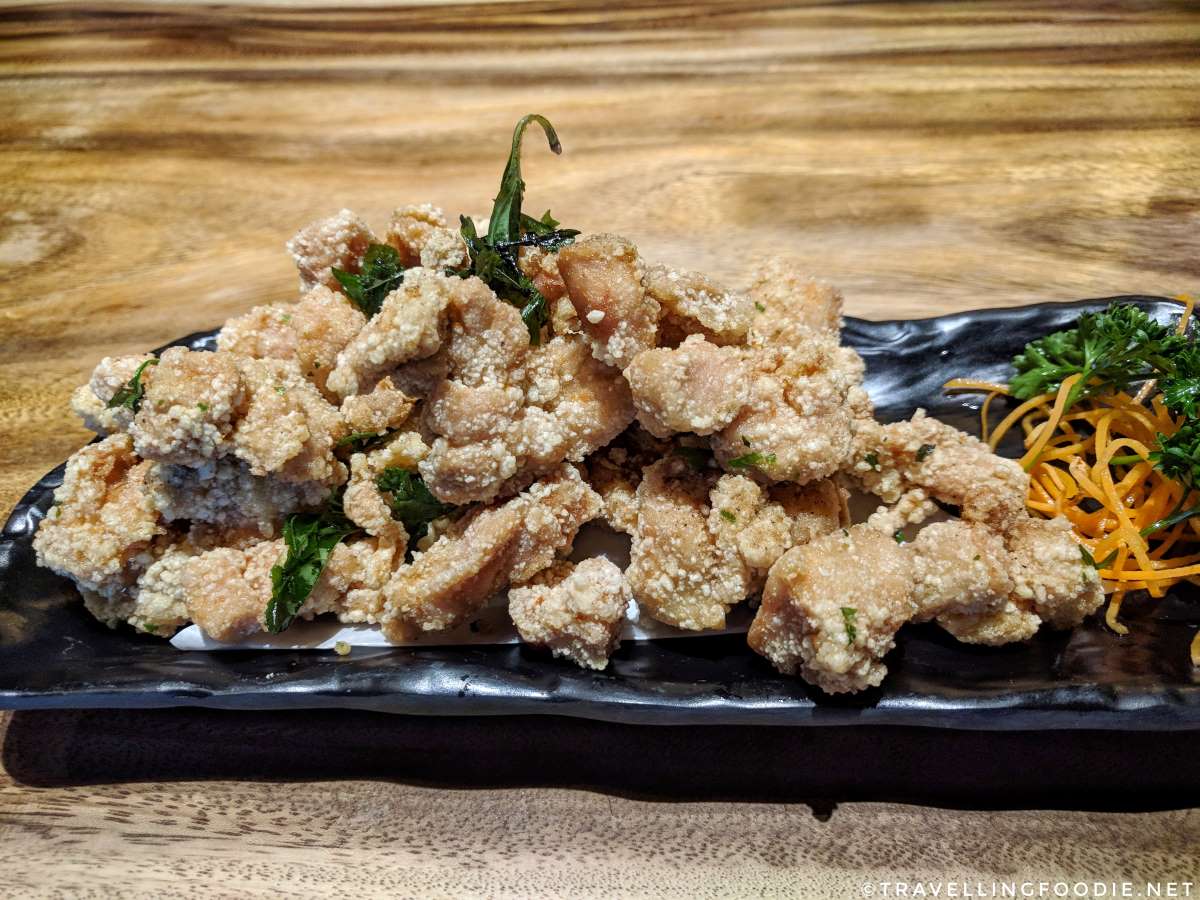 With so many Taiwanese restaurants, where to find the best restaurants in Toronto for Taiwanese Popcorn Chicken? Together with fellow Instagrammers Patrick (@FeedMyPhone) and Jon (@Jon_MrDimsum), we went on a food crawl in the Greater Toronto Area and tried 8 different places to find the best one!

Taiwanese popcorn chicken are bite-sized pieces of chicken that are marinated with a seasoning mixture, battered in egg and flour then deep-fried. Though the breading itself tastes different than the typical American fried chicken, it’s the seasoning that really makes the difference.

The special ingredient? The Five-spice Powder which consists of cloves, cinnamon, pepper, fennel and star anise that brings you all of the five flavours of sour, bitter, sweet, pungent and salty.

Popcorn Chicken is not only a popular appetizer in Taiwanese restaurants and cafes, but also a staple in night markets. And usually, you’ll have some milk tea to go with them.

Did you know? Taiwanese popcorn chicken is also referred to as Taiwanese fried chicken, Taiwanese crispy chicken, or salt and pepper chicken.

In this food guide, we’re covering where to eat in and around Toronto for Taiwanese Popcorn Chicken with reviews and menu prices.

Destiny Asian Fusion is most known in Toronto for desserts and bubble teas.

The popcorn chicken at Destiny Asian Fusion was juicy, crispy and tender in nice bite-sized chunks. However, I found the flavour to be a bit weak despite the fried basil. The portion was reasonable for the price.

Taipei Chin Yuan Pai Ku is located in the food court of Metro Square plaza. Though they do serve popcorn chicken, it is actually a secret menu item that you have to ask for.

Their chicken was good considering being the cheapest (and no tip necessary since it’s in a food court). The chicken was tender and juicy.

The taste was much better than Destiny Asian Fusion. However, my issue with their Taiwanese popcorn chicken is they do chicken strips instead of popcorn-shaped which sort of affected the enjoyment and the breading-to-chicken ratio on each bite.

The strips also made the crispiness inconsistent depending on the size of the strip.

Located in Langham Square Cha Me. Cha is a Taiwanese restaurant known for snacks, bubble teas and ice-based desserts.

Despite being the most expensive out of Toronto Taiwanese popcorn chicken restaurants, the portion is also the biggest at Cha Me. Cha so it’s good to share, and pieces are bigger as well. The chicken was very tender and juicy with the right crispiness.

Though it comes with sauce, I loved it on its own because the flavour is on point. The only issue I had here was that one or two pieces had small soft bone cartilage in them.

ZenQ is also located in Langham Square beside Cha Me. Cha.

The popcorn chicken here were the biggest pieces out of all we tried so the breading-to-chicken ratio was a little bit off. The chicken was tender and juicy.

However, I found ZenQ used too much five-spice powder that there was a very strong aftertaste. Note, they call it Salty Crispy Chicken on the menu.

Lohas Cafe is also located at Langham Square across the parking lot from ZenQ.

Unfortunately, we were all in consensus that this was ranked lowest for Taiwanese popcorn chicken restaurants in Toronto. The popcorn chicken at Lohas Cafe looked so dark that it seemed like it was over-fried or was fried using old oil.

Pieces were on the bigger side as well. The chicken was tender but not juicy.

The worst part was three pieces had big tough bones in it (not even the small cartilage that you can just bite away if you wanted) so you really need to be cautious not to swallow a bone by mistake.

The popcorn chicken breading at Sugar Marmalade was the most different. It looked very white-ish pale and you can see big puffs of white on the breading.

The chicken was juicy and tender, but it was really lacking the five-spice taste. The sweet and sour sauce that came with it reminded me of the ones you get from fast food.

Mabu Generation is also located at First Markham Place beside Sugar Marmalade. I found their popcorn chicken to be more like the American style popcorn chicken because the breading is more like Popeye’s or KFC.

The chicken was tender but on the dryer side. It was also bland too.

Though I typically don’t like dipping sauce with my popcorn chicken, this is one where I dipped a lot on the Sriracha mayo that came with it.

Located in the Jubilee Square, Papa Chang’s is a Taiwanese restaurant specializing in traditional Taiwanese food and some fusion dishes.

Their popcorn chicken is very tender and juicy with the right bite-size portion. It is also the second cheapest overall, or cheapest among dine-in restaurants.

It comes with a sauce which I found unnecessary because it is very flavourful. Maybe a little too flavourful.

I found it would’ve been so much better with less spices. There was also a strong ginger taste that was not to my liking.

Verdict: Who are the best Toronto Taiwanese Popcorn Chicken Restaurants?

From everything we tried in this crawl, here are our top 2 picks for Best Taiwanese Popcorn Chicken in Toronto!

It’s clear from this that the best two for us are both Cha Me. Cha and Papa Chang’s, which isn’t surprising since they are both popular Taiwanese restaurants in Toronto!

Where do you find are the best restaurants in Toronto for Taiwanese Popcorn Chicken?

P.S. We actually had at least 12 places in our list but we didn’t have time to do them all. (Hint to a part 2 maybe?)

Here’s a map of all the places to eat Taiwanese popcorn chicken covered in this food guide.

Hope this food guide gives you an idea on where to eat Taiwanese Popcorn Chicken in and around Toronto.

We’re always looking for the best places to eat them so please let me know what you find are the best restaurants for popcorn chicken in Toronto.