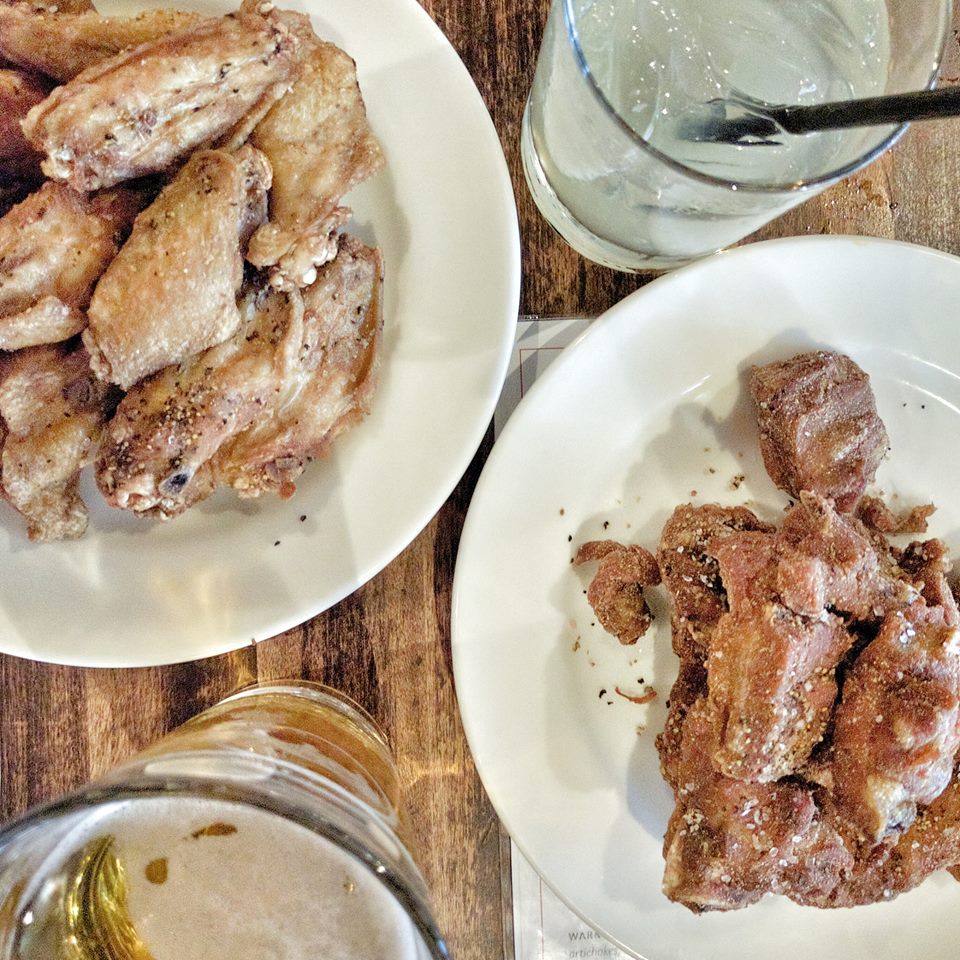 Earls Kitchen + Bar is now in Toronto! This chain of restaurant and bar hailing from Vancouver has opened its first Toronto location in the financial district on King and University.

Last night, a group of us Instagram foodies Anh (@hangry_foodies), Niki (@fourfeetten), Brian (@b_laii) and Mike (@tdotmike) went to Earls King Street as requested by Niki since she’s never been.

Anh and I were the first to arrive 5 minutes at Earls King Street prior to our 5:45PM reservation, and had to wait until 5:55PM to be seated. We were seated at the dining room near the washrooms.

One thing we noticed when we seated was IT WAS SO HOT! People around were sweating and fanning themselves with the menu. What is wrong with the AC here?

On Wednesdays, The daily features at Earls Kitchen + Bar on King Street was Wings for $7.50 and a 12oz Rhino Sleeves for $5. Anh and I were both hungry and couldn’t wait for the rest to arrive.

At that time, I work on the same building where Earls is so this has been my go-to bar for Wednesday drink nights with some friends.

I ordered the Lager Rhino Sleeve and a pound of salt and pepper wings. Anh wanted to try the Leroy’s Crispy Ribs.

The wings here are the typical wings as I remember it. Just your regular wings but it’s good enough for a trendy bar in downtown Toronto.

To our dismay, the Leroy’s Crispy Ribs was dry, even on the inside. OK, I know it’s dry ribs, but I didn’t expect the meat to be dry too. This was rather disappointing considering the $11.25 price tag.

The beer was disappointingly not ice-cold. Considering how hot it was in the dining room, I really wanted a nice cold beer.

What’s worse is, since it was so hot inside and the beer wasn’t ice-cold, the beer got warm pretty fast. Thumbs down!

As we were finishing the appetizers, Niki and Mike arrived. And first thing they noted was how hot it was inside too.

They decided to order the Chili Chicken and Wontons. We all found the chicken meat very dry, and Niki noted that she was actually expecting wonton like Chinese Wontons, not crumbs of wontons.

When Brian arrived, we ordered our mains. It took a while for me to decide since nothing caught my eye on the menu. However, I remember eating The Bronx Burger at Earl’s before and found it really good.

I decided to go for the Bronx Burger, which unfortunately wasn’t available anymore. The most interesting burger I could find was the Royale with Cheese Burger, which I ordered with another round of Rhino Sleeve.

The Royale with Cheese Burger comes with beer-infused cheddar, portebello mushrooms, bacon jam and served on a brioche bun. I upgraded my fries to truffle fries for $2.

The burger was so disappointing. I actually didn’t like this burger at all. First, nowhere did the description said it had pickles, but it actually came with 3 huge slices of pickles which I had to pick out because I hate pickles.

Also, I tasted something sour when I ate even after removing the pickles. Looking at the ingredients, there was nothing that’s supposed to be sour (except maybe jam in general, but this was bacon jam!).

It ruined my overall taste of the burger as the sourness overpowered the burger. On top of that, the toppings were all falling apart especially the bacon jam.

I can’t even put my taste on the beer-infused cheddar anymore. It was either negligible or overpowered by the sour taste as well. I can’t believe this burger is $18 – so not worth it!

The truffle fries were good and had a strong truffle taste. But there were fries I tried where it was over-fried and bursting with oil as I ate it.

A very disappointing foodie night at Earls. Looks like I’ll have to stick to cheap wings and beer here going forward.

Following the disappointing foodie night, I was invited back by Earls King Street to give them another shot. I had brought along the same people, who came from the first visit, so that they can give Earls another shot too.

We sat at the Patio this time, which was newly renovated.

For appetizers, we shared the following:

The Tuna Poke was very good, but was quite small and didn’t have much tuna in it.

I liked the calamari more than the Tuna Poke because of the portions of seafood. I really liked the herbs and greek citrus yogurt that was in the calamari.

I really enjoyed the Chimichurri Skirt Steak as I love the taste of chimichurri and it was done really well here. The steak was perfectly made medium-rare.

My favourite that night at Earls was the BBQ Ribs. I’m a big fan of ribs and it’s often very hard to find the fall of the bone tender type of ribs in restaurants, but this one delivered.

The Cajun Chicken that came was also tender and juicy, but also spicy which I liked (but people who can’t take heat should avoid).

The New York Striploin I found a little bit salty, and this was the consensus among the group. We also agreed that it was juicy and cooked well.

I liked the Steelhead Salmon the least as it was very unremarkable.

Though the Pandemonium looked cool in the tiki mug, I actually found it too sweet to my liking.

My favorite is the Old Fashioned as it was strong with just the right amount of sugar and bitters.

Service this second time around at Earls Kitchen + Bar at King Street was outstanding all throughout. They made sure we were taken care of.

However, I should take this with a grain of salt since this was to fix a previous experience and they knew we were coming. If they can maintain this level of the food and service, then Earls King Street would be a good place to hang out!

Hope this review of Earls Kitchen + Bar gives you an idea what it’s like to dine there so you can decide where to eat in Toronto. Let me know if you have gone and what your experience was like.