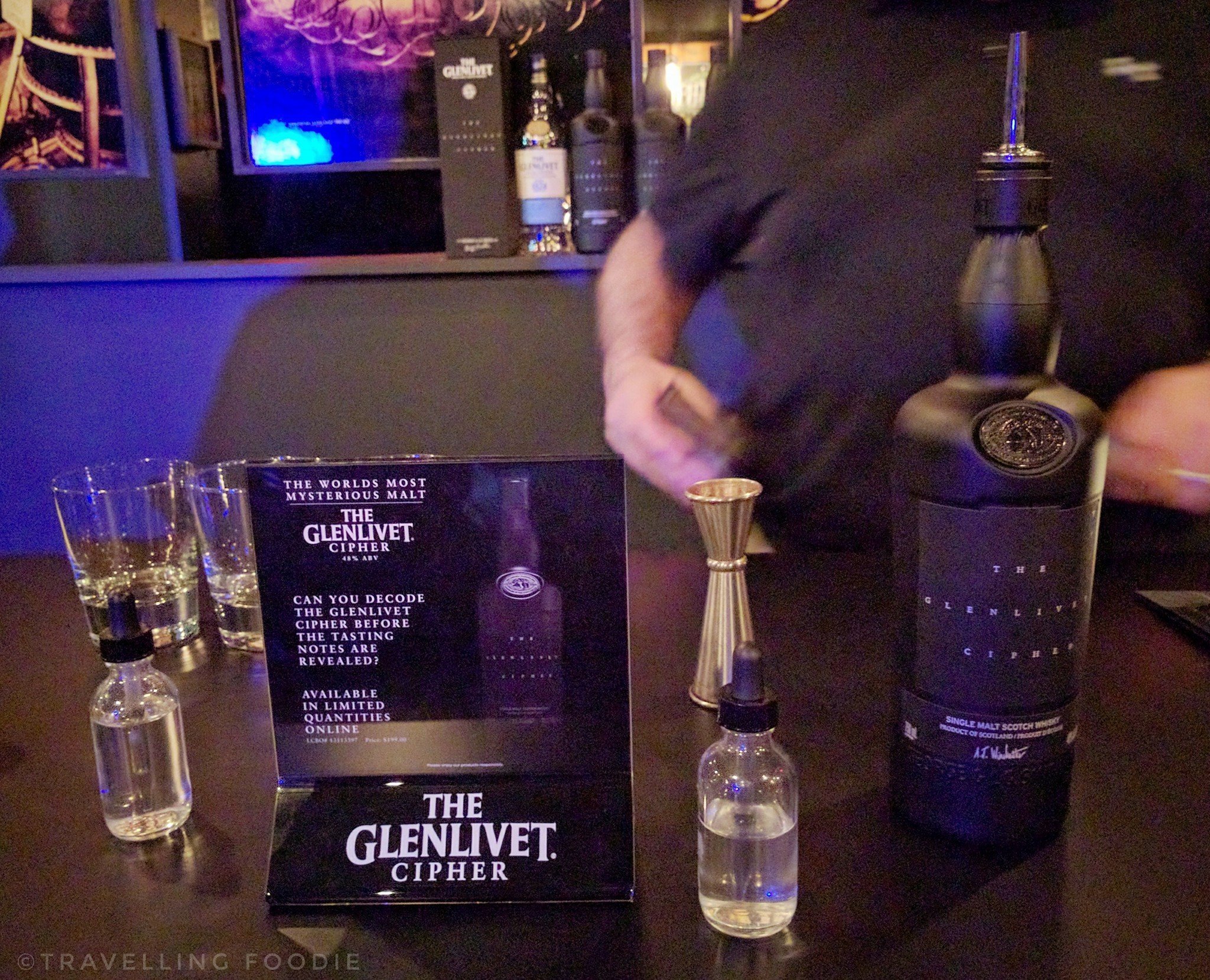 The Glenlivet has introduced a new whisky called The Glenlivet Cipher, dubbed the world’s most mysterious whisky.

The Glenlivet Cipher is a limited edition single malt released by Alan Winchester, a Master Distiller. It’s in a black bottle with no cask information nor tasting notes so you need to be the one to decode it.

The Glenlivet Guardians and Ambassadors, Ian and Frank, hosted a tasting event on November 14, 2016 at the SpiritHouse Toronto for people to try the Glenlivet Cipher and test their senses to cipher the drink.

Whisky is actually my favorite liquor so when Karen (@SincerelyKN) asked me if I wanted to join her, I was very happy to do so!

This tasting was like no other I’ve been to. When our event started, we were led to a room and was told that to get to the tasting, we needed to solve a bunch of puzzles that would give us a code to unlock the room to the tasting within 20 minutes, similar to an Escape Room game.

There were 3 pieces we had to solve in sequential order. The first was unlocking a wheel cipher by looking at determining the lock code from an eye chart. This unlocks a vial with some form of liquid inside.

The second was finding out the Dewey decimal classification of a book by deciphering code from a cipher disc with a help from a written letter and the vial retrieved from the first puzzle.

The third was finding the correct book based on the second puzzle and finding your way our after.

After we escaped, we were then brought to another room with a seating area. Each seat has an iPad and a Glenlivet cup, a water dropper, a pad paper and pen.

Ian the Guardian was there to talk us through. He’s such an expert on whisky and you can see his passion as he talks about whisky and The Glenlivet Cipher.

One thing I learned from Ian that night about whisky was you don’t drink it straight without rocks. You actually need to add water (or ice) to the whisky as doing so opens up a different, new and subtle flavours that you normally won’t experience drinking straight up without water.

With The Glenlivet Cipher in front of us, we were to try to decode the tasting notes via this site: https://www.theglenlivet.com/cipher-experience/.

Travelling Foodie Tip: To best help decipher, you need to drop the water to smell / taste the flavours.

I loved this game as that’s normally what I try to do when I eat or drink: try to deconstruct what I’m tasting.

I also liked the fact that we get our own iPad so everyone gets to do it on their own without any influence in decisions, and there’s no fear of making a mistake or something (unlike in a public forum type of game).

As it turns out, I still need to drink more whisky as I didn’t do so well, compared to the world average of 41%.

After the game, we were brought out to another room where we got to relax with some buffet-style snacks, live music and two drams of Glenlivet Whisky (The Glenlivet Cipher and the 1824 Founder’s Reserve).

Disclaimer: Although the event was complimentary provided by The Glenlivet, the opinions expressed here represent my own and not those of the companies.