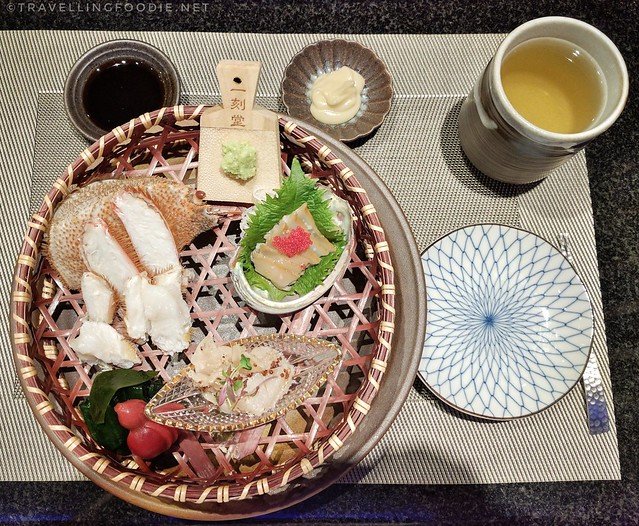 Looking for where to eat in Las Vegas for omakase? Kame Omakase is one of the best sushi restaurants in Las Vegas.

Chef Eric Kim opened Kame next door to his Yummi Grill & Sushi to offer an elevated experience like no other.

Chef Eric sources his seafood similar to other best sushi restaurants in Las Vegas on The Strip but, since Kame is located Off-Strip, he’s able to offer a much cheaper price of $165/person in 2017 ($195 as of 2019).

He explains that because he’s a Korean doing sushi, he actually works ten times more than Japanese chefs in bringing the sushi experience to his diners.

I went to Kame Omakase with my brother and sister during our Las Vegas trip. The spot is very hidden so your landmark will be Yummi Grill & Sushi, which is where we actually first went into thinking it’s the same location.

The sushi bar seats 8 people only and the Omakase lasts for 2 hours, taking you into a journey through the delectable tastes of Japan.

Without further ado, here’s what we had at the Kame Omakase experience! The experience was a mix of kaiseki and edomae style (sushi) omakase.

You can watch the video recap of Kame Omakase here.

We started off with some Kaiseki-style omakase:

After the soup, we then had the Edomae-style omakase where we were served sushi, masterfully crafter by Chef Eric, one piece at a time.

Did you know? Ji Kinmedai is higher quality than regular Kinmedai since it comes from another island called Ji.

When you think it’s all over, there’s still the final rounds of the Kaiseki:

Supposed to be, it would be the dessert course next but Chef Eric was very happy that night and gave some extra items for all of us:

Now it’s really time for dessert. We got a choice between black sesame or Hojicha green tea ice cream.

I got the Hojicha green tea ice cream, and it was so delicious with its strong umami taste!

When the Omakase was over, all seven of us diners applauded Chef Eric for the amazing experience.

The family dining that night with us was celebrating a birthday so they decided to buy Chef Eric a round of beer. Chef Eric was nice enough to give all of us a round of EchigO beer, a Japanese premium red ale which I’ve never had before.

When the omakase was really over, we had some time to mingle and thank Chef Eric, and of course, take a photo with him.

I’m a big lover of sushi and Japanese cuisine in general. Suffice to say, Kame Omakase was the best omakase experience I’ve had so far.

Exceptional quality, great presentation, spot-on service, and an amazing and friendly chef. Omakase is undoubtedly one of the best restaurants in Las Vegas I’ve been to!

Have you been to Kame Omakase? What’s the best omakase in Las Vegas for you?