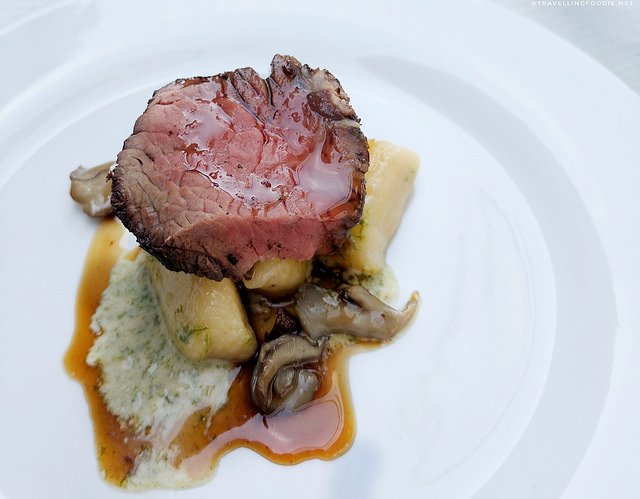 Toronto Taste is an annual food and drink event hosted by Second Harvest, Canada’s largest food rescue charity, for an all-inclusive evening of food and drinks.

This premier culinary event in Toronto was presented by The Daniels Corporation with over 90 food and drink purveyors, a lot of which are among the best in Toronto.

Since 1991, Toronto Taste has raised over $12 million in support of Second Harvest’s food rescue program. Every ticket sold allows Second Harvest to rescue and deliver over 520 meals to people in need in Toronto.

To further support Second Harvest’s food rescue program, a variety of raffle draws and live auction happened that night including the opportunity to dine at Bob Blumer’s LA home or win a $10,000 USD in flight vouchers from Delta Airlines.

One thing I saw was the auction for “A Wild Evening with Michael Hunter” which went for $8,000. In total though, a whopping $925,000 was raised for Second Harvest!

A main feature of the night was the Chef Challenge, in which three talented chefs vied for the title of Toronto Taste 2017 Chef Challenge Winner.

Chefs Guy Rawlings (Montgomery’s), Anne Sorrenti (R&D) and Eric Chong (R&D) had to wow the judges by creating a dish from a box of mystery ingredients with 30 minutes to cook. The Chef Challenge Winner was Chef Guy Rawlings.

I received a media pass to attend Toronto Taste which allowed me VIP access to the event.

This was my first time attending so I was very happy I got to do it since, according to Chef Mark McEwan, “Toronto Taste is the most important event of the year in this city”. It was such a fun night! Looking forward to next year already!

Following my experience from Cuisine & Cuvée, I changed my strategy at Toronto Taste and ate as I took photos. It turned out better as I got to try from 40 food and drink stations!

My top 2 dishes were the Capesante Crudo from Buca and Lamb Shank Baklava from Bar Reyna. Check out all 40 items below, in the order I had them!

Joia All Natural Soda – Orange Soda with jasmine and nutmeg

DISCLAIMER: Though I had complimentary media access to Toronto Taste 2017, all opinions are my own.