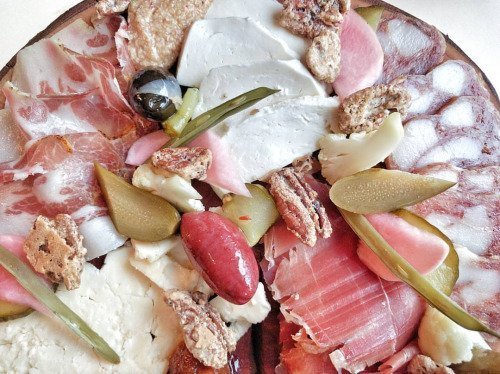 Attention to detail, casual atmosphere, thoughtful wine and drink lists and creative menu offerings are prepared and executed by a very dedicated team at Chinched.

I had the pleasure of meeting both of them and seeing their passion for what they do – such a great duo to be running Chinched Restaurant and Deli!

Aside from being the Pastry Chef, Michelle is also such a great host making sure to check up on the customers to make sure they are happy and well attended to.

This is one of the most popular drinks at Chinched Restaurant because Partridgeberry is a specific fruit that can only be found in Newfoundland and Labrador and Cape Breton.

I love the cocktails here because they are strong too. For this particular drink, I found the cranberry to have overpowered the cocktail.

The Limoncello Drop was such a refreshing drink. It takes me back to Limoncello drinks that I’ve had in Naples, Italy.

I loved the mix of cheese and meat here. Mix and match the cheese along with various garnishes to get different flavour profiles in this board.

The Charcuterie at Chinched is the best Charcuterie board in St. John’s due to its range of selection of cheese and meat. They use Five Brother Artisan Cheese which is the only cheese manufacturer in Newfoundland and Labrador.

These were baked well, but the overall taste was salty. I barely tasted the oyster anymore because of the saltiness from bacon and parmesan.

These were so addicting good! The Buffalo Pig Ears were crunchy with a spicy and tangy flavour from the Buffalo sauce!

It goes perfectly with beer similar to what we eat in the Philippines called Sisig.

First time having Cavatelli. At Chinched, they make their pasta homemade and these were just perfectly al dente.

There were lots of lobster chunks on this pasta which I really love. The creamy sauce went well to enhance the lobster.

The bite reminded me of gnocchi. It can be quite heavy so I recommend sharing this dish.

This was so simple yet so perfect. The cod was perfectly pan-fried where the texture was tender but the outside was crunchy. The cod didn’t fall apart as you cut into them.

I LOVE the lobster nage. It went so well with the cod to add an enhanced flavour to it, without overpowering the cod.

It was my first time having this kind of soup. I found it very interesting how, though it uses cheese, it is still a clear based soup instead of a creamy melted cheese texture.

I found the broth a little salty, but in a good way since it’s Parmigiano salty, and not salt salty. This was very interesting indeed.

The Pavlova at Chinched Restaurant was definitely the best dessert I had in St. John’s! OMG!

I thought I was full from the dinner already but I wanted more of this. It was like eating fluffy clouds!

You get the chewiness and sweetness of the meringue with the sourness of the berries and the crunchiness of the nuts. Oh so perfect!

Hope this restaurant review of Chinched helps you decide where to eat in St. John’s!

Disclaimer: Although this was a complimentary tasting with Chinched, the opinions expressed here represent my own and not those of the restaurant.